Marble trout is only indigenous species of trout in the Adriatic (Western) part of the river system in Slovenia. This Soca watershed, which flows into the Adriatic, consists of the river Soca and its tributaries RiÅ¾ana and Reka. Marble trout originally evolved from the brown trout. Its colouring and marbled pattern changes from river system to river system, so it is possible to find genetically pure marble trout with red dots or splotches.

The marble trout´s diet changes with age: the smaller fish feed on nymphs principally, and sometimes take emergers or dry flies. That changes as they grow bigger and need more energy to sustain their bodyweight. Then they become carnivorous, feeding mostly on other species of fish.

Misguided attempts to improve fish stocks in the past led to the introduction of brown trout into marble trout waters, where they successfully reproduced with marble trout, producing fertile offspring. As a result, pure-bred marble trout nearly became extinct. Thanks to huge efforts by the Fisheries Research Institute and the Tolmin Angling Club, natural and genetically pure marble trout are now again the dominant species in the Soca watershed.

Rainbow trout and greyling, which do not breed with the marble trout, also populate these rivers. 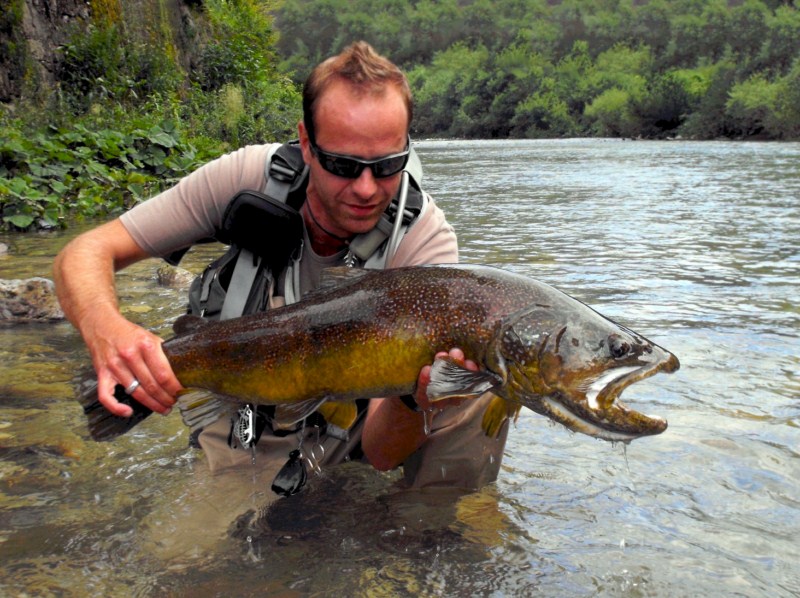 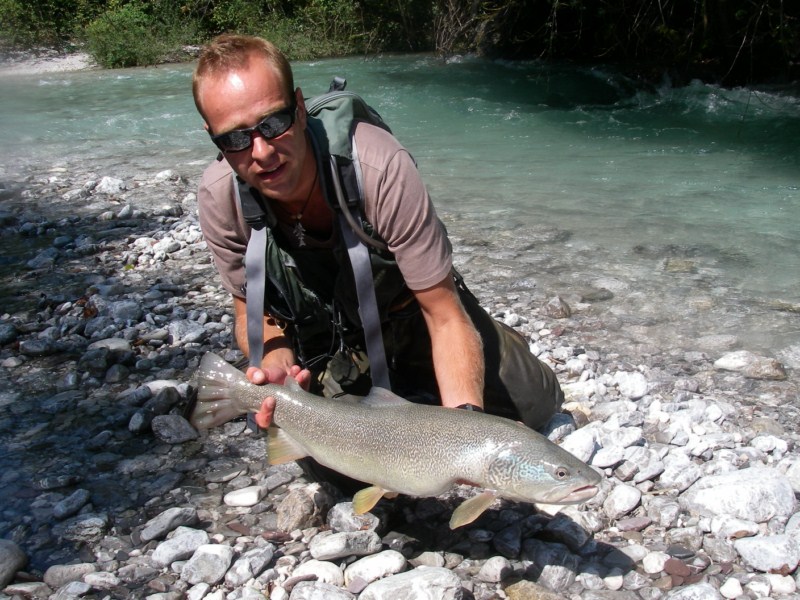 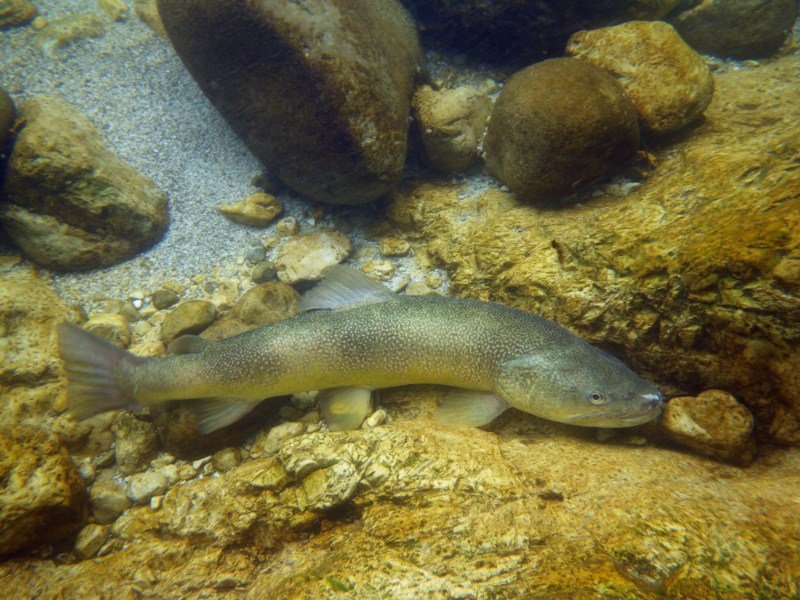 Marble trout is indigenous trout specie in the rivers that drain to Adriatic Sea. Adriatic sea is a part of the Mediterranean Sea. So historically Marble trout were present in Italy, Slovenia, Croatia, Bosna and Hercegovina, Montenegro and Albania. But due to crossbreeding with introduced Brown trout from other parts of Europe it nearly became extinct. Last genetically pure populations were discovered in high Alpine rivers like Zadlascica where introduced Brown trout due to waterfalls couldn't penetrate. Slovenian Research Institute and Fishing club of Tolmin threw extensive research and repopulation managed to bring back specie that was at the edge of extinction. In Slovenia genetically pure Marble trout can now be found in Idrijca river with its tributaries Kanomljica, Cerkljanscica, Trebuscica and Baca rivers. Also Marble trout population in Soca with tributaries Tolminka, Ucja, Koritnica, Lepena is growing strong, so basically of the endangered list. Other rivers that are also inhabited with Marble trout are: Vipava, Reka, Rizana rivers. The easiest way to distinguish between Marble trout and Marble trout – Brown trout hybrid is to take a look at gill cover. If the marking on the gill cover is marbled in pattern then it is probably Marble trout despite having an odd red mark on the body. There are many different types of Marble trout. Idrijca type is yellow to green in color, Soca light almost gray- blue earning the name of Soca ghost. Sometimes they can have three stipes on the side of the body they act as perfect camouflage between the boulders. Due to becoming carnivorous at early age it is one of the fastest growing species of trout and can reach over 40 inches and exceed 50 pounds. Probably making it biggest specie of trout in the world. In Slovenia with exception of lower reaches of the Soca and Vipava fly fishing is only allowed method to target this specie of trout. Up to 20 inches it is possible to target on dry fly, for bigger nymphs and for trophy specimens big streamers - similar then what we would use for Hucho/Huchen/Taimen/Danube salmon or Pike/Musky. I would consider prime time would be April when rivers are running a bit high and off colored due to spring rain. Fishing season is from April to October. Fishing for trophy specimen is hard work since big fish do not feed often are predominantly carnivorous, meaning they probably eat once a week when rivers are a bit higher and colored. In this conditions smaller fish move positions and get ambushed by big marble trout. When fishing for trophy fish I normally use 8 -10 wt rod with heavy sinking head to get the light fly as close to the bottom as possible trying to imitate injured fish. When hooked they are not the strongest fighters since they are more ambush predators similar then pike. They can take pray bigger then half its size. They have bigger head then other trout and can open there mouth at almost 70 degrees allowing them to catch big pray - dragging it under the rock where they live. Quite often they can't swallow it whole but eat it chunk by chunk. Name Marble trout comes from distinctive marbled pattern. There ability to camouflage between the limestone rocks is simply amazing. On few occasions I have witnessed that they can change color and pattern in a matter of seconds making them prime apex predator in the rivers of Western Slovenia.